According to a study published in The Conversation last year, a shared song – “our song” – is the musical glue that binds friends and lovers. And because neuroimaging research shows that music provides a “super stimulus” for the brain, a spot of group singing with good friends would be a no-brainer, surely?

However, despite an ability to read music and play the piano, I cannot, to save my life, sing in tune.

But what if I could perform in a choir, accompanied by the original artist? Mightn’t my tuneless warblings be drowned out in such a scenario? Couldn’t I pretend that I, too had a voice?

#66 Sing in a Karaoke Choir

Fortunately, I have a small cinema at home –  called Cinema X –  that can double up as a tiny auditorium if needed. It has lovely views over the garden when the dark curtains are drawn back, allowing light in. Ideal for a spot of communal singing.

There’s a large television in the room, and because a clever young person showed me how to ‘cast’ from my iPad to the screen using a special connection, it’s possible to find any artist on YouTube and project it onto the television. The excellent surround sound is an added bonus.

So all I needed now was a willing choir. And a program.

Enter my friends from Discovery Group. We’ve been meeting regularly for years now, and each month we try out a new activity.

All I’d have to do was ask each person who was able to attend to provide me with a list of their two or three all-time favourite songs and bingo, we’d have a program. 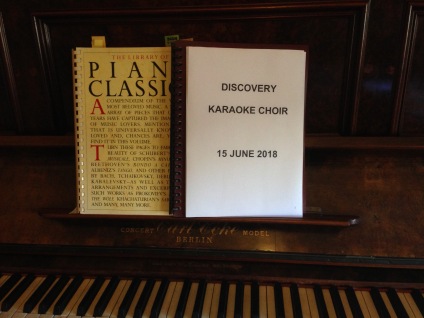 Many found it extremely difficult to limit their favourites to a mere three songs, so the lists I began to receive via email grew … and grew … and grew.

Fortunately, one of the musical members agreed to take on the role of choir director, so the two of us pondered and culled and collated and listened to YouTube offerings until at last, our program was complete: 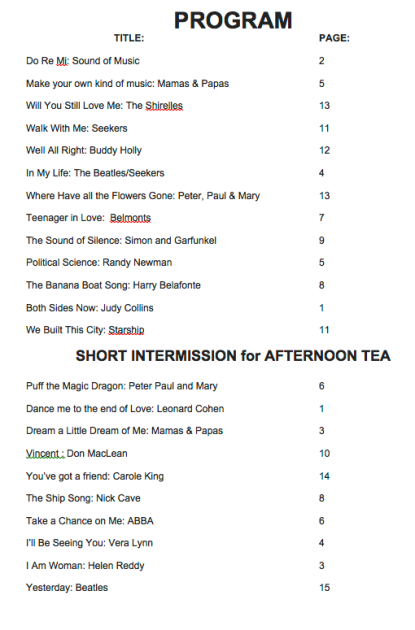 It may be possible to guess our ages from the play list. Not a Beyoncé song to be heard…

Well, we had a ball, though you’ll notice that all the participant’s identities have been hidden to protect the innocent.

Some songs we belted out with gusto, like the Shirelles ‘Will You Still Love me, Tomorrow?” 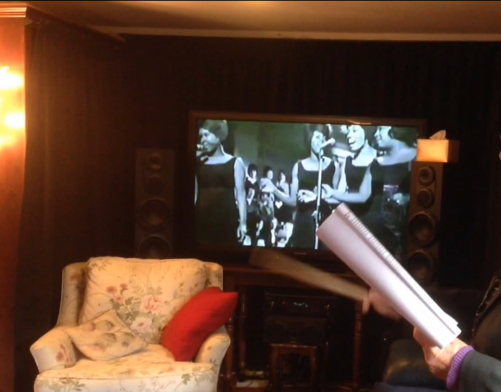 Our musical director took her duties seriously, baton and all

And some, like Don MacLean’s Vincent, we sang very gently, wiping our eyes surreptitiously along the way:

We’re itching to do it again, when all our Discovery friends are available to come.

There was a lot to learn, of course, like avoiding keys that were way out of our comfort zone (looking at you, Nick Cave), or songs that were a tad too slow, or not well enough loved.

Next time, with this practice session under our belt, we’ll be even better, we’re sure.

And I learned that do-re-mi is a very good place to start and that Julie Andrews is a great teacher.

Anyone who can help me sound vaguely in tune gets my vote.