Such an evocative word, découpage.

So now I have the time, why not give découpage a try?

Put simply, découpage involves cutting out pictures, gluing them to an object and then coating the pictures, and the object, with layers of varnish.

But exploring this activity has led me to the realisation that there are two distinct forms: the Art of découpage and the Craft of découpage.

The Art form involves exquisite design and a dedication to perfection. Beautiful pictures are chosen, meticulously cut out and then pasted onto a surface in ever increasing and overlapping patterns. Layer upon layer of varnish is applied, with careful sanding between coats. I’ve been told up to 70 applications might be in order. This results in a finished design that shines with a glorious lustre and depicts a three dimensional scene with depth and colour the envy of any Renaissance painter.

The Craft form, however, involves cutting out a pretty design, pasting it onto a surface, then coating with—oh, maybe five or six applications of varnish. This form of découpage has any number of YouTube and Pinterest and Instagram examples. I quickly realised that this was my level of découpage.

Step one: Select your surface

I had an old Queen Anne dressing-table stool of my mother’s which no longer had its dressing-table and so cried out for conversion to a small side table.  After removing the cushion insert, my talented Bunnings Buddy was able to make a solid table top for it.

All it took was a coat of paint to make it ready to be découpaged:

This is where the artistic skill comes in. Choosing a montage of photos I’d taken over the years, my original plan was to stick these on before varnishing:

But it was pointed out to me, by someone with more artistic skill than I, that this was looking like a table littered with old weekend magazines. Not quite the image I was after.

Then I thought of using a photograph of a bunch of gorgeous flowers a dear friend had sent me recently, after she stayed for a weekend:

So lovely, but could this be enhanced even further to incorporate the idea that a découpaged piece should have hidden depths behind the picture?

Step 3: Increase the level of complexity

It was then I hit upon the idea of turning this photo into a photomosaic, using dozens of smaller pictures from my photo album.

So I turned to a clever website that allows you to instantly turn your photos into photomosaics. Simple to use, and free—or, if you’re after a higher definition, relatively inexpensive—the image it produces can then be copied across to a USB for printing at a photo shop.

After a few days of glueing and varnishing and sanding the photomosaic, the final result wasn’t half bad:

And if you look very closely at the picture …

No, go in closer… 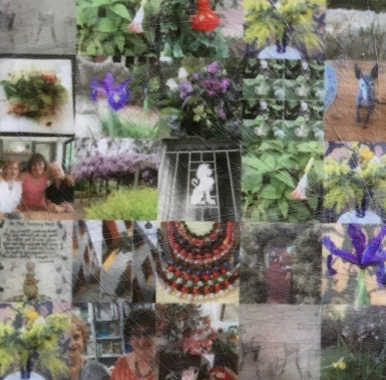 you’ll see the entire picture is made up of hundreds of tiny snapshots of a life.

Now this is going straight to the pool room!