It began with an invitation. A school reunion — a BIG one — to be held this year in May.

After the momentary horror of acknowledging that so many years had passed since I left school, my thoughts turned fondly to the girls I knew back then and the fun times we had.

Recalling our school sports days, I idly wondered what had happened to the two dolls my sister and I had always taken to these events. They were dressed in the school’s summer uniform of the day — thanks to our mother who’d organised it from some magical doll outfitters she’d read about — and they became popular mascots for our sports team. 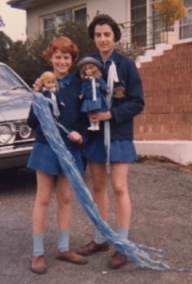 Maybe I should dig them out from whatever forgotten box they’d been living in and donate them to the school? Wouldn’t that be a good thing to do?

But alas, over the years, the moths, silver fish and possibly even mice, hadn’t been kind to the dolls. It looked like I’d need to learn how to:

One was missing part of her skull and all her hair. The other had only one eyelash, making her eyes appear rather lopsided when she blinked. They both looked unloved and rather tatty, but fortunately, nothing that couldn’t be repaired, so I began by machine washing Blinky’s uniform, while Baldy waited her turn. 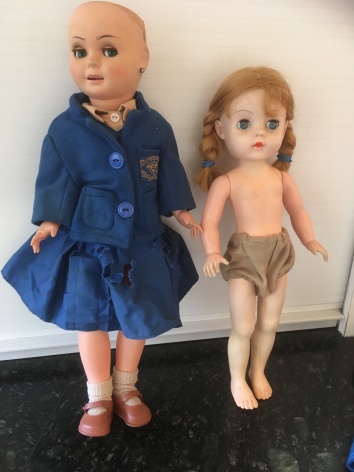 A Google search of dolls and their bits and bobs was an eyeopener. Unbeknown to me, there’s an entire world inhabited by dolls of all shapes and sizes, their never-ending wardrobes, and a vast selection of missing anatomy parts. Enter a local internet site called Gum Blossom Babies which proved perfect for all my needs.

The choice of wigs was amazing.

There was the ‘Annie’, with her ‘riot of ethereal curls’:

or ‘Betty’, sporting the ever fashionable sausage curls:

But mindful that such showiness was frowned upon by the nuns in our day, I settled on the ‘Doris’ a simpler, brown, no-nonsense wig that was a fair approximation of Baldy’s original tresses.

The skirt portion of both their uniforms were full of holes and unsalvageable,

but after washing them, then carefully unpicking the lower section of the uniform, they could be used as a template to measure new skirts using matching fabric. Thank goodness the bodice was in good nick, because I didn’t like my chances of re-creating those little sleeves and collar!

Pleats, I’ve discovered, are a bit of a nightmare, both to create and to press into perfectly crisp formation —

until a friend introduced me to

the Rajah pressing cloth, a chemically impregnated cloth (gulp) that works like magic on pleats.

Once these new skirts were reattached to the bodices, Baldy’s missing pate and fresh ‘Doris’ wig were reattached, and Blinky was given a new eyelash.

The straw school hats, to which my mother had meticulously stitched the school’s hat band replete with the school crest, only needed the elastic replaced, and the blazers came up beautifully in the wash.

Once dressed, they were propped up on their new doll stands for all to admire: 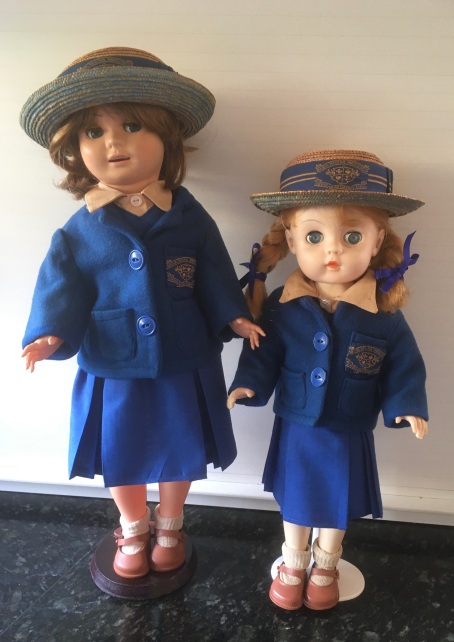 It would be such a good thing if I donated them to my school when I return there for the reunion, wouldn’t it?

Unless, maybe, just maybe, I hang onto them a wee bit longer?

I mean, I can always bequeath them in my will …