At twelve years of age, I first encountered Sally Dalton* and realised there was no such thing as a level playing field. Sally was a year older than I, very pretty with long, dazzlingly-blonde hair, excellent sporting ability and, as I came to recognise quickly … something extra that I didn’t have.

We were to race against each other to see who’d represent our school in the 50-yard sprint at the prestigious (as I thought at the time) Combined Girls’ Sports Day.

I beat Sally easily in the first trial, but for some inexplicable reason, that wasn’t what the coach wanted.  So a second race was arranged, when I beat her again. Finally, coach scheduled a third encounter when I had a very heavy cold.

Sally prevailed that day, and was immediately granted the golden ticket to the Combined Girls’ Sports Day.

It’s not that I’ve hung on to this memory for the whole of my life, it’s just that I’ve decided it’s time to:

The ordinary are those who, through no fault of their own, will never be wildly popular, will never get away with behaviour that the Sally Daltons of the world indulge in with impunity, and whose very name may even give rise to negative, or at best, neutral comments.

Watching the birds frolic in my birdbath recently brought it home to me. There was the unloved Indian Myna daring to enjoy a bath. The bird that, if you Google its name, gives rise to pages with comments like “Flying Rats”, “Bird Control: netting, spikes, bait, shock and more” and “The Most Important Pest in Australia.”

Poor old Myna. No one has a good word to say about it, but it didn’t ask to be introduced here. It’s managed to make a brilliant success of surviving by scavenging just about anything, pinching native birds’ nesting hollows by turfing out their chicks, and gorging on our fruit crops.

Its communal roosting habit helps it organise a social life, avoid predators and exchange gossip about food sources. A poster-chick for evolutionary success. If we didn’t hate it so much, we might even admire the fact that it mates for life and is … well, quite pretty.

Compare the attitude to the hummingbird, which is the Sally Dalton of the bird world. It’s tiny, can hover with its wings vibrating oh-so-cleverly, and can even fly backwards.

It has a cake and a movie named after it.

But I recently discovered that hummingbirds’ belligerence towards their fellows is legendary. Fighting hummingbirds will try to stab each other’s eyes out with their bills. Their own species, for goodness sake. On an evolutionary scale, how silly is that? Why isn’t it hated for behaving that way?

I could write at length about how we despise other bird species, too.  Just try and defend sparrows to most people.

Exquisitely constructed, but you may as well suggest you find serial killers attractive.

And we all hate starlings, but look what they can do:

Watch them all frolic in a bird-bath together, splashing and diving and – what’s really impressive – sharing the space comfortably with each other, and you can’t help but find pleasure in them.

Sure the magpie’s a native, which gives it instant Sally Dalton status, but its horrible swooping habit in Spring is poor form, and you should see it terrorise all the other birds at the bird bath. 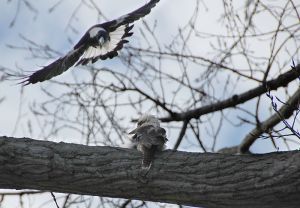 So I’m raising a glass to all the ordinary in society, because it just depends on how you look at them.

* Names have been changed, because the real ‘Sally Dalton’ doesn’t need any more attention.

Following this posting, a friend has sent me a wonderful link to a video of starling murmurations.

Watch it in awe.

I’m now wondering if this post should really have be called “Celebrate the extraordinary”!