Among the myriad advantages of living in a regional city (think smaller mortgages, houses with real gardens, bushland close by, a ‘rush hour’ known as a ‘rush couple-of-minutes’, and proximity to a Bunnings or a Spotlight) is that the airport is situated thoughtfully close to town. Which was the impetus for my latest activity:

My home is under a flight path, which isn’t as bad as it sounds. Smallish planes might go over a few times a day depending on the prevailing wind direction. They’re like comfort food as I look up and think, ‘Ah good, the 4.50pm from Sydney’s running on time. All’s well with the world.’

Recently, a Local Council newsletter advised us of a website called ‘flightaware‘ where all the comings and goings of aeroplanes into, out of, or over Albury can be followed in real time.

By visiting this site it’s possible to explore the once secret and sometimes silent world above us. That white streak in the distant sky or the plane coming in overhead to land can be identified and followed without leaving home. (And I thought online jigsaw puzzles were a marvellous way to waste time.)

All this activity above us, all the time. Who knew?

And by clicking on any one of these tiny icons, it’s possible to find out anything you want to know about that particular plane. Its origins, who owns it, where its travelling to, if it’s on time. It’s like Facebook for planes.

But more exciting than this is the chance to track planes on their descent into Albury Airport, watching their blue icons get closer and closer to their destination before the little aeroplane blip suddenly – poof! – disappears. 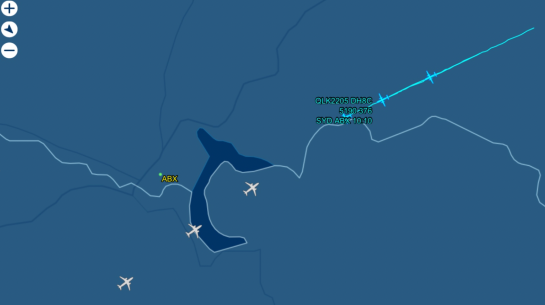 The distant roar of the engines thrusting into reverse tells me it’s landed safely.

Flights are not always as straightforward as you’d expect them to be, though. What, for example, was this pilot up to in the first few minutes after he left Albury? 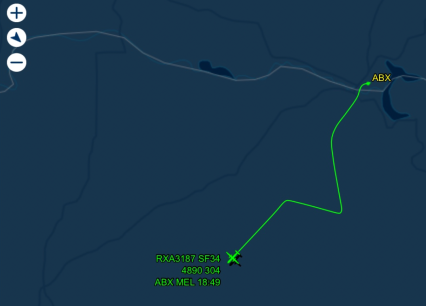 Wouldn’t you love to know. Specs left at home?

Recently, while I was doing some virtual plane spotting on my iPad in the kitchen, I noticed that three planes, a Rex, a Qantas and a Virgin, all from Sydney, were coming in at about the same time. The battle that ensued in the air for pole position was quite mesmerising.

Straightforward at first, the three blue planes are all lined up, Rex leading across the Hume Weir (which I now realise looks surprisingly like a whale’s tail), followed by Qantas then Virgin … 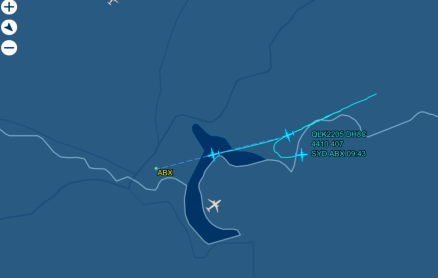 In an instant, though, it changes again. Virgin loses confidence in her position and takes a quick turn to her right – also heading backwards – to leave the chequered flag for Rex, no competition! 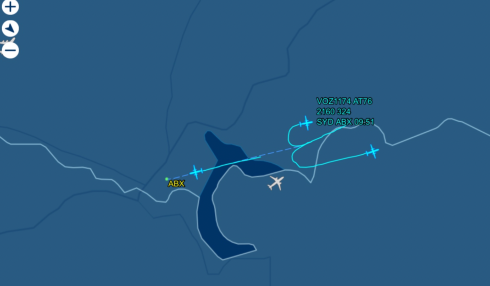 Once Rex lands and his blip disappears, it turns into a tussle between Virgin and Qantas for second spot as they appear to do aerial acrobatics. 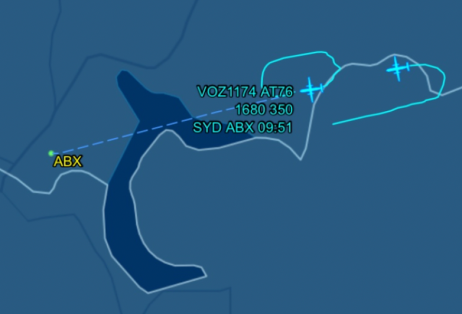 Don’t ask me what this is all about, but surely someone needs to look at the scheduling timetable if it’s this messy to get them all in safely.

By now, Qantas has totally lost the plot. He’s coming in a distant third

But apart from the sporting aspects of virtual plane spotting, there are some very practical advantages too.

If I’m going out to the airport to pick up any incoming passengers, I can see well ahead of time if their plane has left its destination as expected.

AND, I can time my departure from home so that my seven minute car journey to the airport begins when the blue blip of my passengers’ plane indicates it’s exactly seven minutes away from the airport. Needless to say, it’s taken some time and complex calculations to work out where, exactly, the plane’s sweet spot is. Oh, the satisfaction when we both arrive at Albury airport simultaneously.

No more having to pay the Council parking fees at the airport should I be left hanging around waiting because the plane was running late.

Hang on a minute. Maybe Council should have thought this through before they let us in on the secret…