Australia’s in the middle of the great 2017 Australian Bird of the Year vote.

Apparently, the Ibis is leading the polls, which is annoying many people who deride them as ‘Bin Chickens’ due to their scavenging habits. But it’s not their fault they’ve been squeezed out of the Sydney wetlands market.

As I tell everyone who complains about the cost of living in the big cities: ‘Move to the country. Life’s so much better here. Just take a look at the accommodation we provide for our ibis…’ 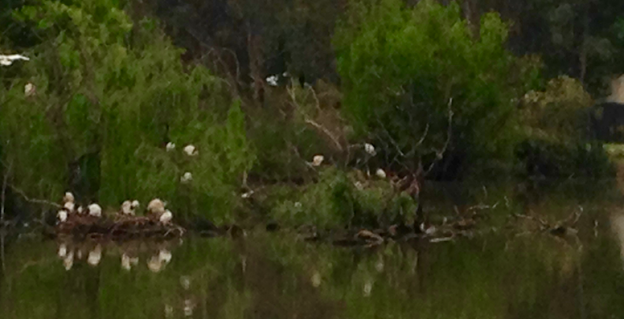 So realising what an abundance of bird life we have here, I took the opportunity in late October to

when the Aussie Backyard Bird Count was held. This allows anyone the chance to play at being a great naturalist for a week: 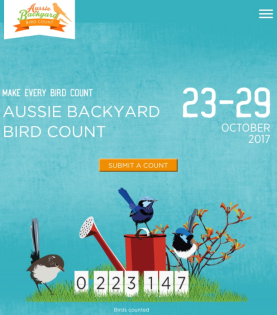 It’s as easy as downloading the free Aussie Bird Count app from the App store and noting all the birds you see in your location over a 20 minute period at any time of the day for one week. And thanks to GPS, it knows where you’re looking. Simple, I thought.

Oh dear. The arrogance of ignorance.

I quickly realised that having superb eyesight is the first requirement for all budding twitchers.

I was known as Mr Magoo at primary school, even when wearing my brand new, dorky spectacles. 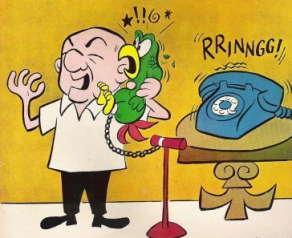 …this is an easy mistake for the near-sighted

As I spent the first seven years of my life seeing the world as one blurry blob, I missed out on essential early visual training that most people with normal vision take for granted. At least, that’s my excuse.

Using binoculars during the 20-minute spotting sessions helped but it didn’t fully solve the problem. Because there’s another difficulty: the subjects being studied.

Sloth spotting I could manage, but birds move really fast and flit around, darting here and there before you’ve had time to take a good look at them and then they fly away and they’re gone.

The brightly coloured ones, like fairy wrens and rainbow lorikeets aren’t a problem,

…easy peasy (and in the next street)

but what about all the neutral-looking brownish-greyish nothing-to-see-here types? Who can spot in an instant whether their tails are up or down, what the shape of their beak is, what are the exact colourings on their undersurface or details of their neck markings to aid identification?

So, even if you’re lucky, and the bird stays still long enough to get a good look, you need to know the actual name of what you’re seeing. You need Knowledge.

Sure, the app tries to help, but it only works for the cognoscenti. So I entered descriptive phrases like  ‘medium-sized bird, near water, looks a bit kookaburra-ish with a flat sort of head, and a greenish cap and a lovely cinnamon colour when it flew away,’ but Google was silent on the matter.

(A couple of weeks after the count had closed, I happened to show the photo to a friend who, unbeknown to me, is quite the bird identifier, and she immediately said ‘Oh, that’s a Nankeen Night Heron’. AND SHE WAS SPOT ON!

She wants me to call on her any time I have difficulty identifying birds. This is going to be invaluable next year.) 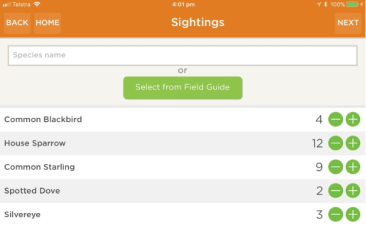 The app presupposes way too much in-depth knowledge, too.

Like any talented pre-schooler, I know a duck when I see one, but that wasn’t good enough for this app. It wanted to know if it was a Wood Duck, a Grebe, a Shoveler, a Shelduck, a Mallard, a freckled duck… oh the list was endless. And when I chose one that looked a bit similar to the ‘duck’ I was seeing, it would flash up the message, ‘unlikely based on survey location,’ so I was back to square one.

By day 6, I knew I was in desperate need of professional help during spotting sessions, so I called on friends who live on the outskirts of town, in the hope that I’d see more interesting birds than house sparrows and spotted doves. I struck gold.

Not only were they brilliant at seeing them, but they knew their birds, had several bird books, and by the end, we had a list that helped bolster my reputation no end:

Elephant stamp for this lot.

I’m now wondering if I should go on to join a citizen science group for frog listeners using an app that identifies the frog you’re hearing. At least poor vision wouldn’t be a handicap, just the leech-ridden, mosquito infested swamps I’d have to frequent.

Meanwhile, if you’d like to participate in the 2017 Australian Bird of the Year vote, polls are open until December 9th and you can vote here.

2 thoughts on “#59 Become a Citizen Scientist”