Working out if there are better ways to manage all the small domestic activities that make up a life isn’t something that consumes a lot of time for many people. This is a pity, because without reflection, one never knows if removable barriers exist on the pathway to an easier life.

Recently, I had a chance to view my domestic habits through fresh eyes.

OMG! Was there ever room for improvement…

It all came about when long-standing friends whose home renovations were progressing more slowly than planned and who were temporarily without a functioning home, came to stay for several weeks.

Not only did I have the pleasure of sharing my space and time with two good friends, but the changes that I’ve made courtesy of their insights have resulted in stunning improvements to my life.

[I hate to disappoint anyone reading this who thinks they may learn new or exciting tips, but this journey began from a pretty low base. My domestic blindness, it would appear, knows no bounds.]

Hot Water System
I have gas hot water. It’s very efficient. Too efficient. When you turn on the hot tap, it’s dangerously hot. For aeons, anyone having a shower at my place has risked second degree burns if the cold water tap isn’t turned on immediately.

But had it occurred to me that I could rectify this?

No, it hadn’t, until more intelligent people living in the house brought a solution to my attention. 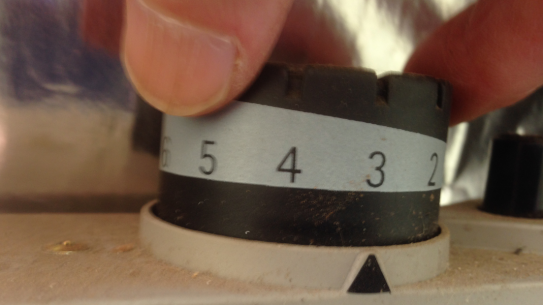 Simply move the dial on the outside gas hot water tank down from ‘5’ to ‘3’ and – presto – cheaper gas bills and no more scary showers. D’oh!

I upgraded my kitchen table about three years ago, and for some obscure reason, bought one that could be enlarged with an extension to accommodate 8 to 10 people. It also had solid chairs that even Hercules would have had trouble shifting.

I live alone. I don’t need a table that can accommodate 8 to 10 people. In fact, the thought of entertaining so many in that space gives me palpitations. Nor am I a weight lifter.

But it wasn’t until I was complaining about the table-setting to my new house mates that it struck me I didn’t have to put up with it. I could pass it on to someone who’d love it in a way I never could, and buy a more suitable arrangement.

When you only have to wash and dry for one, it’s easy to overlook the fact that you’re bending to put the washing in the machine, bending to pull it out, lifting and carrying a loaded basket outside and bending repeatedly to peg it on the line.

But people who are getting a little older shouldn’t have to do all this bending. So imagine my delight when my house mates affixed a metal stand they no longer needed to lift the front loading machine a foot off the ground. No more bending. 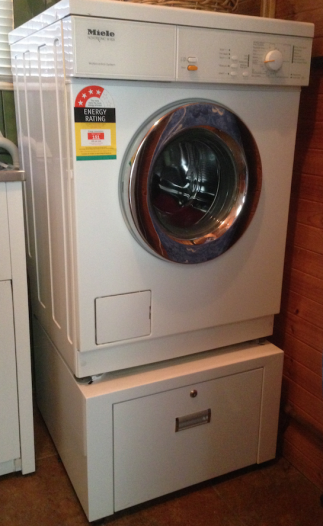 I didn’t know you could still get those clever laundry trolleys like my mum had in the 60s, but it appeared one day and has remained here. I feel quite spoilt.

And with its new, improved functionality the laundry space cried out for a mini makeover. No more baskets crammed higgledy-piggledy everywhere. Now they’re strung in a faux French-Provincial style from the roof and much more accessible. Très bon!

breakfast muesli,
salads,
stir fry,
chicken and avocado sandwiches,
for munching while walking the dog
with any form of chocolate
ground up for cake-making flour…

*Filo pastry triangles can be reheated in a sandwich press. Crisper than a microwave, faster than the oven.

*If trays and large plates are stored vertically rather than horizontally, your heart won’t sink each time you have to extract them. Simplicity itself. 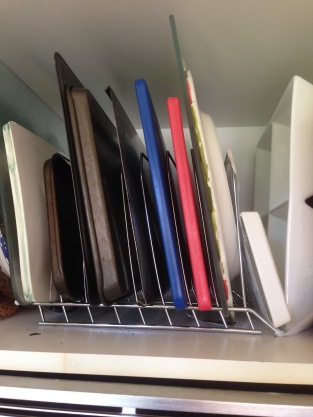 Then there was an old fire pit bought in a fit of madness one day.  The one that consumed massive amounts of wood and briquettes, and sent immeasurable quantities of CO2 into the air such that I couldn’t justify using it any more.

Rather than offload it at the local Waste Management Facility, I was inspired by my house guests after hearing of their plans to make wicking beds for their new vegetable garden.

So the pit’s now lined with black plastic – with a small window cut out to release the water overflow – has some AGI-pipe and stones in the bottom then geofabric under the soil. 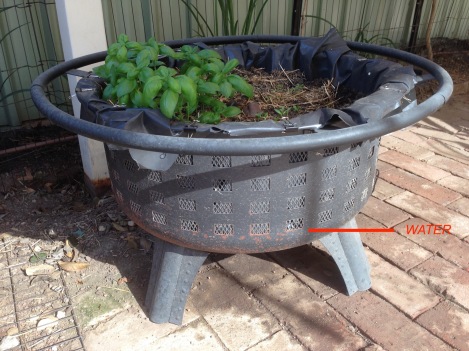 It’s a bit amateurish, but so far the basil is thriving, the coriander and parsley seeds are emerging and it only needs watering once a week. 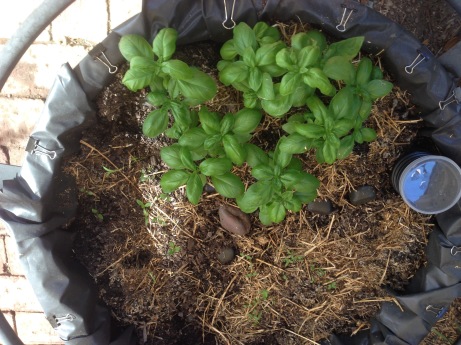 There have been lots of other little improvements too, like finally working out how to pre-program the heater so the kitchen’s warmed before I get up in the morning, or how something called graphite will make a lock that a key’s always jammed in work much more smoothly.

But my friends have moved into their sparkling, renovated home now and I’m bereft of company and ideas.

Will there ever be the opportunity to gain such insights again?

Naturally, I asked them if they’ve changed anything about their lives as a result of sharing with me.

I’m pleased to report that just a few streets away there are now ziplock bags in a freezer containing peeled, whole ginger waiting to be grated into something delicious for dinner any time they need it.